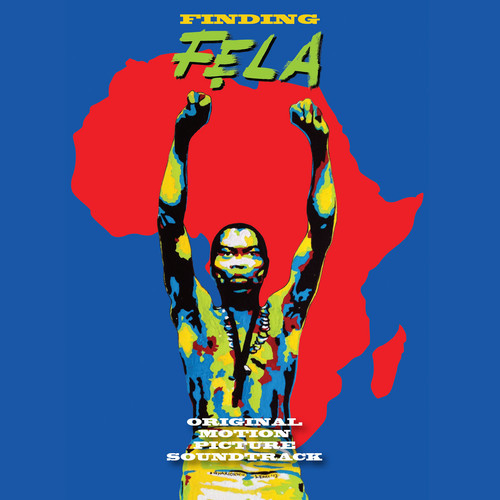 ARTIST: various artists
TITLE: Finding Fela: Original Motion Picture Soundtrack
LABEL: Knitting Factory
This two-disc soundtrack to the new Fela Kuti biopic (in theaters right now) is a worthwhile document in its own right. Fela’s material has been reissued, anthologized and generally picked-through with a fine-toothed comb over the last few years, so it’s become hard to come up with collection that stands out as well as this one does. The first disc includes some pre- and proto-Afrobeat material: 3 is straight highlife, 4 is a ballad recorded during his brief, seminal residence in Los Angeles in 1969, and 1 is his first big Nigerian hit from 1971. And disc 1, track 2 (here in an edited version) is a 1977 overlooked masterpiece. On disc 2, track 2 (also an edit) is another deep cut, one of the rare Afrika 70 pieces where the vocal segments seem designed to play second fiddle to the ensemble, arrangement and Fela’s saxophone solo. Then there’s 2-6 (a long edit), which is no one’s idea of a deep cut – it’s one of Fela’s most seminal and controversial songs, skewering Christians and Muslims with the same sharp pen. You’ll find it on many Fela collections, and with good reason. This one’s equally good for Fela-heads and newbies.
TOP TRACKS: Disc 1 – 1    2    3    4       Disc 2 – 2    6
ALSO RECOMMENDED: Disc 1 – 5    6      Disc 2 – 1    3    5    7
Labels: Reviews