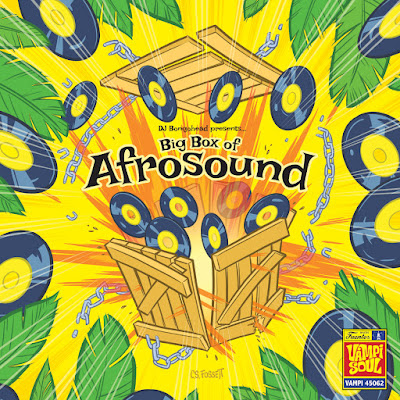 ARTIST: various artists
TITLE: Big Box Of Afrosound
LABEL: Vampisoul
Vampisoul and DJ Bongohead are back with their third installment in the Afrosound series, collecting the best psych and funk-inflected material from Discos Fuentes, Colombia’s oldest and largest record label. This time the set is packaged as a box of ten 45 RPM singles, with groovy artwork by C.S. Fossett. It’s a package made with collectors and DJs in mind, and so is the selection – deep cuts all, many previously unavailable as 45s, with only a couple of overlaps with volumes 1 and 2. One of the overlaps is track 7 (or disc 4, side A for you vinyl lovers), by the obscure group Cumbias En Moog who deliver exactly what their name promises – it’s a demented masterpiece. Also coming from the psych side are 17, a speedy and trippy merengue, and 3, an Afro-Latin workout. 12 is an Afrobeat riff at a tempo (almost) unused in that genre until the 21st century. 9 is a fairly typical porro (big band cumbia) except for what sounds like a theremin added to the mix. And the set wraps up with two tracks from Fuentes’ greatest band, Fruko Y Sus Tesos: 19 is one of their best salsas and 20 is a funky bugalu. It’s a party in a box – play the whole thing at your next shindig.
TOP TRACKS:    3    7    9    12    17    19    20
ALSO RECOMMENDED: all the rest of them
Labels: Reviews