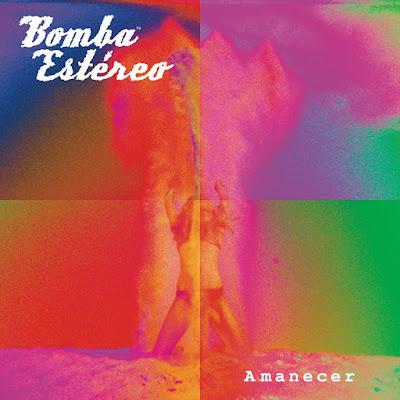 ARTIST: Bomba Estereo
TITLE: Amanecer
LABEL: Sony Music Latin
This is the fourth album in Bomba Estereo’s ten-year career; it’s their first for a major label (Sony) and the first time they’ve used an outside producer (Ricky Reed, a hitmaker for Jason Derulo and Pitbull). So, selling out or buying in? A little of each. The sound is a bit more global pop/EDM and a bit less Colombian roots than it has been – there’s essentially no cumbia at all here, but you can hear the influences of house music (especially South African kwaito), American trap and juke, Angolan kuduro and more in this multinational stew. But the Colombian elements poke through on some of the album’s best tracks. Track 3 has the same loping, midtempo guitar-driven sound borrowed from champeta that made “El Alma Y El Cuerpo” and “Sintiendo” such delights on their last album Elegancia Tropical. 5, all about Barranquilla’s carnaval, is a party anthem like their first hit “Fuego,” but based on champeta rather than cumbia. 4 is a new and exciting sound for the band, built around a crazy sample of the gaita cane flute. And 10 is a house-based floor filler not unlike Elegancia Tropical’s “Caribbean Power.” Coming soon to dance floors worldwide.
TOP TRACKS:    3    4    5    10
ALSO RECOMMENDED:    1    6    7    9
Labels: Reviews