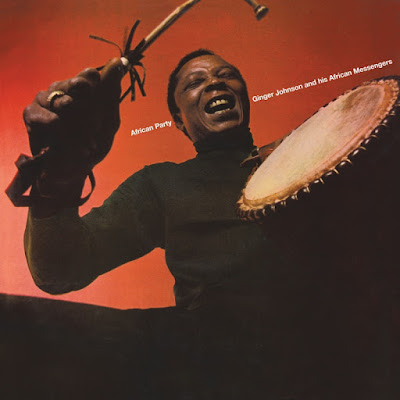 ARTIST: Ginger Johnson & His African Messengers
TITLE: African Party
LABEL: Freestyle
Here’s a little slice of history – a crucial album in the dissemination of African music. Ginger Johnson was a Nigerian drummer who joined the British Merchant Navy and moved to London after World War II. He quickly became a go-to guy in the London scene: backing Ronnie Scott, making some of the first African recordings in England, helping found the Notting Hill Carnival, running his own nightclub, and collaborating with many of the 1960’s “swinging London” artists (Stones, Genesis, Brian Auger, Hawkwind and many more). Significantly, he was a major influence on a young Nigerian jazz musician in London named Fela Kuti. This album was originally released in 1967, long before African music was commonly heard in the first world. The African Messengers featured multiple percussionists, and they leavened their heavy drumming sound with melodic and harmonic ideas from jazz, West African highlife music and calypso. Check out track 1, which includes a little bit of all of the above. 6 is a calypso tune given a thundering drumming backing, 10 is a festive highlife track, and 5 sounds like the very early rumblings of Fela’s afrobeat. Nice find!
TOP TRACKS:    1    5    6    10
ALSO RECOMMENDED:    2    3    4    7    8    9
Labels: Reviews