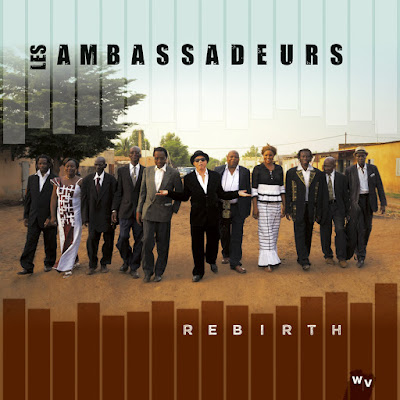 ARTIST: Les Ambassadeurs
TITLE: Rebirth
LABEL: World Village
Les Ambassadeurs Du Motel De Bamako (their full name) is one of the greatest ensembles in African musical history; their reunion is a major event and has produced a superb new four-song EP. The band was founded in 1970, as West Africa was throwing off its colonial shackles and adopting the esthetic philosophy of authenticite: modern adaptation of classic traditional cultural elements. They broke up in 1985, and lead singer Salif Keita went on to become African music’s biggest international superstar. Now they’ve reunited for concert tours in 2014 and this year, and to raise money for Keita’s foundation which provides safety and services for Mali’s albinos. After last summer’s tour they hit the studio and recorded these four tracks – two (tracks 1 and 3) are beloved staples of their repertoire, the other two are deep cuts from the 70’s. The epic 1 is here given a breezy treatment, 3 is quite similar to the original except a bit faster, and 4 (deep enough that I don’t know the original) stands up to its better-known peers. 2 is the wild-card, a funky workout with vocal by its author, Idrissa Soumaoro. If you’re one of those people (like me) who think West African golden-age music is an artistic pinnacle, this one has your name on it.
TOP TRACKS:    1    2    3    4
Labels: Reviews