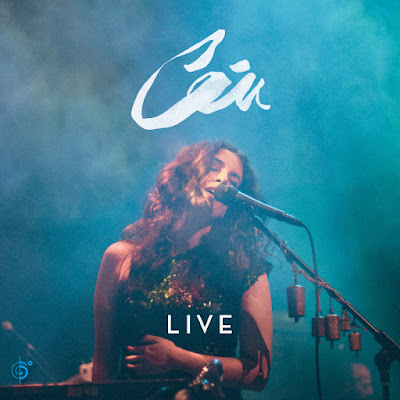 ARTIST: Ceu
TITLE: Live
LABEL: Six Degrees
After three well-received studio albums, here’s a live set from this popular young Brazilian singer-songwriter. Those three albums earned Ceu four Grammy nominations, but they didn’t quite do it for me – a little too mannered and precious for my taste. This one is just the opposite. Ceu and her world-class band dig into her catalog, pulling out a gutsier, more electric, more dynamic sound. Track 9 (written by one of Brazil’s best contemporary songwriters, Lucas Santtana) is a good example – mellow and dubby in the studio, it’s transformed into a dark midtempo rocker here led by Dustan Gallas’ guitar; it sounds like it could be the hidden track on Cat Power’s The Greatest. 11 is given a rock ‘n’ roll overhaul as well; 15 was originally recorded with a kind of Afro-EDM arrangement, here it’s more like straight, soulful Afrobeat (there’s lots of good Afrobeat coming out of Brazil right now). 1 has a long, slow English-language intro, then dives into a neo-tropicalia sound at which Ceu and her band truly excel. And 3 (another Santtana co-write) brilliantly taps into the classic samba-soul sound of Jorge Ben. One of Brazil’s most promising artists puts all the pieces together here.
TOP TRACKS:    1    3    9    11    15
ALSO RECOMMENDED:    2    5    6    7    8    12    13
Labels: Reviews