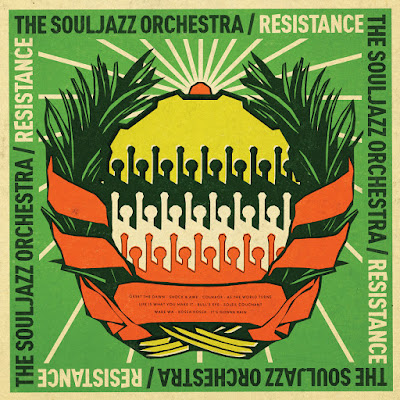 ARTIST: The Souljazz Orchestra
TITLE: Resistance
LABEL: Strut
If there’s one band in the world that best captures the Global A Go-Go esthetic, it might be The Souljazz Orchestra. The sextet from Ottawa, Canada has its roots in Afrobeat, incorporates an ever-increasing assortment of global influences, improvises like a jazz band, wears its left-wing politics on its sleeve, and never fails to make you wanna dance. Their first three albums for Strut Records (2010’s Rising Sun, Solidarity in 2012 and 2014’s Inner Fire) each made my year-end top ten list. This new one, believe it or not, may be the best of the bunch. The new influences this time are the rhythms of Francophone Caribbean and Africa: tracks 3 and 7 touch on Antillean zouk plus cadence and konpa from Haiti; 1 and 6 add snappy Congoloese soukous drum patterns to Afrobeat. 9 is a classic Souljazz Orchestra Afro-funk workout that sounds like it should go on for 15 minutes. And 8 is a cover of an ultra-deep cut: East African funk from the 70’s by the Loi-Toki-Tok Band (the original can be found on Soundway’s terrific Kenya Special compilation). Certainly a contender for best album of 2015.
TOP TRACKS:    1    3    6    7    8    9
ALSO RECOMMENDED:    2    4    5    10
Labels: Reviews