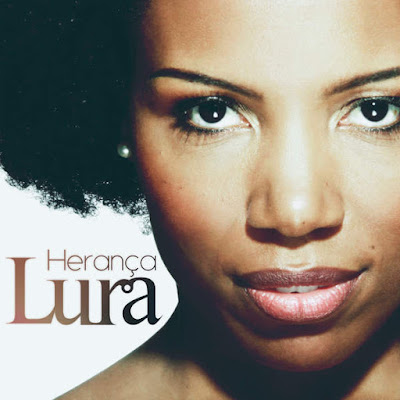 ARTIST: Lura
TITLE: Heranca
LABEL: Lusafrica
Cabo Verde is an island nation off the coast of Senegal with a population of about half a million that has long punched way above its weight in the music world. This sixth album by Lura, the daughter of two Cabo Verdean immigrants to Portugal, demonstrates many of the delights of the music of her parents’ native land. The country is best known for morna, the plaintive 300-year-old genre made famous in modern times by Cesaria Evora. Lura knows her morna, but she really excels on the more upbeat funana and batuque styles that are equally representative of the islands’ sound. Starting right at the top, track 1 is a great example of contemporary funana: a brisk march-like tempo (145 bpm), snappy drumming, soulful accordion fills (here played on a keyboard), and a melody that will remind you of Brazilian samba. 6 is another killer funana, and 2 is funana with some of the bluesy feel of morna. Lura and her band do a superb job on batuque on the impossibly beautiful 12. And 13, from the pen of Cabo Verde’s current Minister of Culture Mario Lucio (author of five songs here), has the strong influences of the Congo and South Africa. Lovely stuff.
TOP TRACKS:    1    2    6    12    13
ALSO RECOMMENDED:    4    10    11
Labels: Reviews