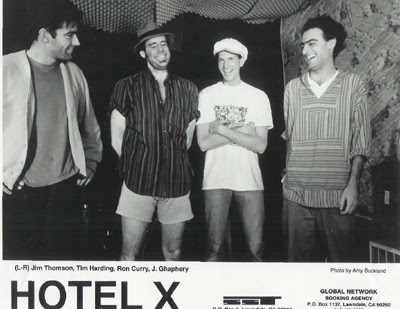 Richmond has a lot of visitors this week, and maybe a few of them will be tuning in to WRIR and checking out Global A Go-Go.  So I've been thinking about what I'd want to tell them about my home town.

We've got a pretty great music scene here for all sorts of sounds: punk and metal, bluegrass and old-time, indie rock and indie hip-hop, jazz and classical, roots rock and singer-songwriters.  If you live here and you don't know have at least one friend who's a musician, you're probably just lame.  Or lying.

Of course, my thing is world music, and we've got some amazing, imaginative, skilled and experienced world music acts here in Richmond.  (None more experienced than Hotel X, pictured above in their original 1992 incarnation.)  I'll feature four of them on this week's program.

Also this week: some songs from behind the former Iron Curtain, that rockin' Central African guitar sound, and what's new in desert blues.