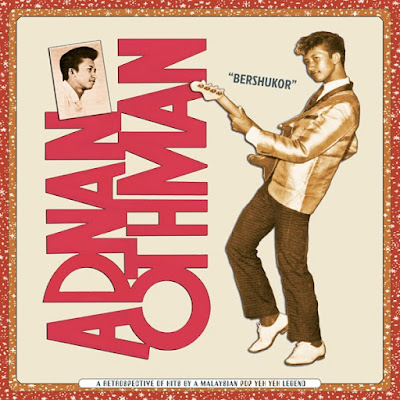 ARTIST: Adnan Othman
TITLE: Bershukor: A Retrospective Of Hits By A Malaysian Pop Yeh Yeh Legend
LABEL: Sublime Frequencies
WRIR’s own Carl (DJ Carlito) Hamm, host of If Music Could Talk (Sundays at 7 PM) flipped from record collector to record producer in 2013 when Sublime Frequencies released Pop Yeh Yeh, a two-album review of the beat, garage and psych eras in Malaysia and Singapore. Now Carl’s done it again: his subject this time is the career of one of the top pop yeh yeh artists, Adnan Othman. Carl has chosen 26 tracks from the eight EPs that Othman released between 1968 and 1971 running the full gamut of styles that were popular in that place and time. Track 5 could be right off the Nuggets box set, 9 is based more than a little on Them’s “Gloria,” 14 sounds somehow like Sam The Sham & The Pharaohs, 19 is a ballad with what sound to me like British art-rock touches, 22 is straight garage a la the Sonics, and 25 has those Byrds-esque chiming guitars that were so popular in the 60s. The eight-page booklet is a gem: rare photos, a long interview with Othman, and the world’s most comprehensive thank-yous. Nicely done, Carl!
TOP TRACKS:    5    9    14    19    22    25
ALSO RECOMMENDED: most all of the rest of them
Labels: Reviews