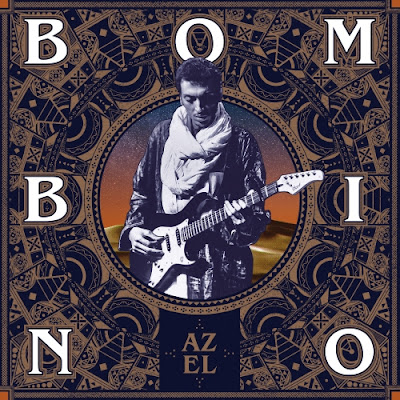 ARTIST: Bombino
TITLE: Azel
LABEL: Partisan
Goumour Almoctar, who performs under the name Bombino, is now probably the most recognizable Tuareg musician in the world. He’s part of the second generation of assouf (desert blues) artists, following in the footsteps of the pioneering band Tinariwen. Bombino’s first album, recorded in 2007, was a field recording; by 2013 he had graduated to a major-label imprint and was produced by the Black Keys’ Dan Auerbach. On his fifth album, Dirty Projectors’ Dave Longstreth is behind the board. Assouf is guitar music, and Bombino is a real old-fashioned guitar hero: check out his wailing on track 1, the album’s first single. Even better I’d say is 6: it starts out in a contemplative mode but ends with pure fire, one of the best guitar rave-ups you’ll hear anytime soon. On 3, Bombino shows his skill on acoustic guitar, sounding like John Fahey or Leo Kottke in the Sahara. He’s been experimenting recently with a style he calls “Tuareggae,” playing his blues-based runs over a modified one-drop riddim; 5 shows off this new direction quite nicely. Another top-notch session by this up-and-coming African star.
TOP TRACKS:    1    3    5    6
ALSO RECOMMENDED:    2    4    7    8    9    10
Labels: Reviews