Music Of Morocco From The Library Of Congress: Recorded By Paul Bowles, 1959 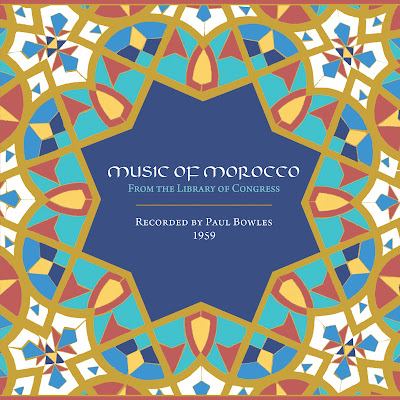 ARTIST: various artists
TITLE: Music Of Morocco From The Library Of Congress: Recorded By Paul Bowles, 1959
LABEL: Dust-to-Digital
Novelist (The Sheltering Sky), composer and UVa dropout Paul Bowles lived for 52 years in Tangier, Morocco as a legendary American expatriate. Bowles would never call himself an ethnomusicologist, but he made 250 seminal recordings of Moroccan music in 1959 with financing from the Rockefeller Foundation and the Library of Congress. The Library released two albums of that material in 1972; here now are 4 CDs (4-1/2 hours) of Bowles’ best recordings along with a 120-page book documenting this project, which was overseen by Philip D. Schuyler. Bowles’ recordings are quite amazing: not only do they broadly document Moroccan musical performance practice at that date, they also reflect Bowles’ unique and highly cultivated aesthetic, the same aesthetic that would later introduce the world (via Brion Gysin, William S. Burroughs, Timothy Leary, the Rolling Stones’ Brian Jones and Ornette Coleman) to the “4000-year-old rock band,” The Master Musicians Of Jajouka. Bowles was concerned that folk music was disappearing due to modernization and cultural policies, and he feared change and hybridity would dilute the music he was trying to capture. Today’s aesthetic is quite different: change and hybridity are seen as necessary elements in cultural development, so tracks that speak to us now are, ironically, frequently the ones that Bowles disparaged in his own notes. Among my favorites: the swooping female unison singing of Disc 1-Track 5; the solo qsbah (end-blown flute) on 2-3, a sound you can hear in many modern chaabi and rai recordings; the guinbri (bass lute) that drives 2-7, 3-4, 3-8 and most contemporary gnawa music; 3-6, a superb example of what Berber gnawa sounded like in 1959; and 4-3 and 4-5, two spectacular performances of malhun and Andaluz, lyric poetry set to music. This deluxe package is a must-have for folks who love a deep dig into the sounds of the world.
TOP TRACKS:    1-5    2-3    2-7    3-4    3-6    3-8    4-3    4-5
ALSO RECOMMENDED: many of the rest of them
Labels: Reviews