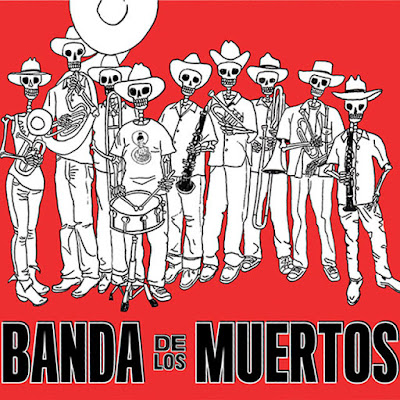 ARTIST: Banda De Los Muertos
TITLE: Banda De Los Muertos
LABEL: Barbes
Banda is a musical style that, like Norteno, reflects the influence of German immigrants on Mexican culture. Where Norteno uses accordion and bajo sexto, banda has a marching band’s instrumentation: drums, brass and woodwinds. With 34 million Mexican-Americans, there’s a big audience for the genre in the USA, but there was no banda in Brooklyn until Banda De Los Muertos came around. Of course, a Brooklyn banda was bound to be a little different: just one member is of Mexican descent (co-founder Oscar Noriega) and most of the players work in jazz combos, symphonies and Broadway show pits when they’re not playing Mexican music. On their debut album, they dig into genre standards like tracks 4 and 12 with gusto and no irony whatsoever – the players genuinely enjoy this music. Modern bandas play a lot of re-arranged pop songs – 10 is an Ecuadorian hit scored for winds and brass. 6, by the legendary Banda El Recodo, gets a stately reading, almost a bolero. And one of the world’s most famous rancheras, Marty Robbins’ “El Paso” (8), will never sound the same to you after hearing Banda De Los Muertos’ version. This album will have you grinning.
TOP TRACKS:    4    6    8    10    12
ALSO RECOMMENDED:    1    2    3    5    7    9    11
Labels: Reviews