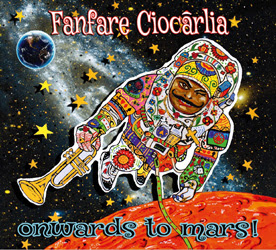 ARTIST: Fanfare Ciocarlia
TITLE: Onwards To Mars!
LABEL: Asphalt Tango
Fanfare Ciocarlia, the 12-piece gypsy brass band from Zece Prajini, Romania (a village the band says is so small it’s not on any map) is the hardest working band in show business: they’ve played over 2000 gigs in their twenty year career, most all of them outside of Romania. Their constant touring leaves little time for recording – this is their first studio album without a billed co-star since 2007, and it’s glorious. Ciocarlia are known for their unlikely covers – this time it’s Balkan brass versions of Screamin’ Jay Hawkins’ “I Put A Spell On You” (track 6) and Lucho Bermudez’s porro cumbia classic “Fiesta De Negritos” (14). They’ve finally cut a studio version of 2, a favorite of their live sets. 9 is a version of a song by Moldova’s Zdob Si Zdub, a rock band that’s heavily influenced by the Balkan brass sound that Fanfare Ciocarlia pioneered. 4 is a traditional number that Richmonders may recognize – it’s in the Richmanian Ramblers’ repertoire. And their frequent collaborator Koby Israelite has contributed several new songs, my favorite of which is 5. If you’re a fan, this album is right up there with their finest; if you’re new to the party, welcome!
TOP TRACKS:    2    4    5    6    9    14
ALSO RECOMMENDED:    1    3    7    8    10    11    12    13
Labels: Reviews