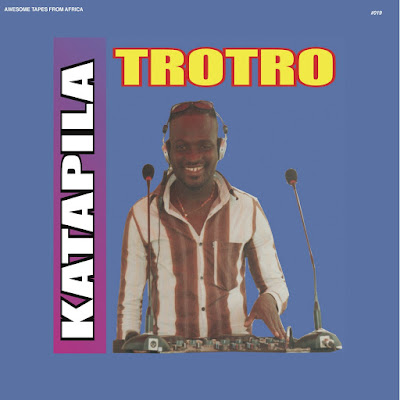 ARTIST: DJ Katapila
TITLE: Trotro
LABEL: Awesome Tapes From Africa
Ghana’s electronic pop music scene is dominated by hiplife, the highlife/hip hop/dancehall fusion, usually in the Akan language, that’s seemingly everywhere. DJ Katapila (Ishmael Abbey) is an outlier: he’s making EDM that’s based on Ga traditional rhythms. However, Katapila’s characteristic style is one that electronica veterans will latch right onto – he’s indebted to vintage sounds from the 80’s and 90’s like Afrika Bambaataa’s electro, Chicago acid house and Detroit techno. The blend of these influences is natural and infectious – like Nozinja’s Shangaan electro from South Africa, Katapila’s music is fast (typically around 140 BPM), minimalist and fun; he even favors the same Alvin & The Chipmunks speeded-up vocals that Nozinja throws into all his songs. The insistent track 4 is the most maximal of the bunch: it actually has a 4-measure-long guitar sample on it. Other than that, it’s pretty much all synth bass and percussion (kick drum and various bell sounds are his favorites) plus voices. Awesome Tapes From Africa strikes again with an unexpected pleasure that’s way more accessible to first-world ears than you ever would have suspected.
TOP TRACKS:    2    4    5    9
ALSO RECOMMENDED:    1    3    6    7    8
Labels: Reviews