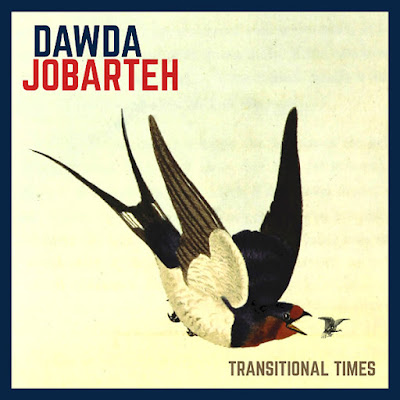 ARTIST: Dawda Jobarteh
TITLE: Transitional Times
LABEL: Sterns Africa
West African Mande music, certainly the centuries-old classics and also some of the modern stuff, can sound stately, formal, even cool to the listener. These same adjectives are frequently applied to the Nordic jazz sound made famous by Jan Garbarek, Terje Rypdal and ECM Records. On his second album for Sterns Africa, Gambian kora player Dawda Jobarteh, who has lived in Denmark for 17 years, continues to explore the musical nexus of Scandinavia and the Malian empire. He has the help of a wonderfully sympathetic band: guitarist Preben Carlsen has that atmospheric Rypdal sound down cold, but like Bill Frisell he does so much more. Likewise, saxophonist Jakob Dinesen can sound like Garbarek but on 5, an imaginative reinterpretation of a John Coltrane classic, he stretches out impressively. Jobarteh’s kora playing is percussive (he started as a drummer) and unadorned, his voice straightforward – this is a musician who doesn’t feel the need to overwhelm you with technique. The album is an enjoyable listen from beginning to end; don’t miss the passionate track 3 and its interplay between Jobarteh and Carlsen.
TOP TRACKS:    3    5    6    10
ALSO RECOMMENDED:    2    4    7    11    13    14
Labels: Reviews