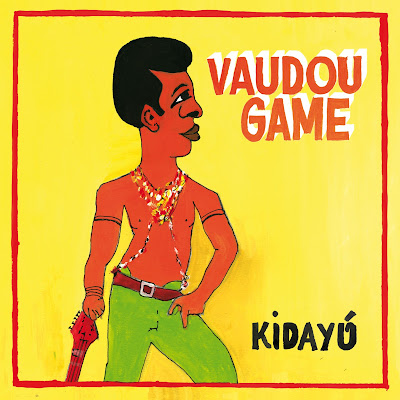 ARTIST: Vaudou Game
TITLE: Kidayu
LABEL: Hot Casa
The second album by Lyon, France-based sextet Vaudou Game nails the 70s Afro-funk sound better than any other current band. Leader Peter Solo has a direct lineage to that era: he’s the nephew of singer Roger Damawuzan, the “James Brown of Togo.” Solo’s band echoes his uncle’s music and that of Orchestre Poly-Rythmo, El Rego and other exponents of what Samy Ben Redjeb of Analog Africa Records calls “the Islamic funk belt” of Ghana, Togo, Benin and Nigeria, where stuttering local rhythms were blended with American-style funk to produce some of the world’s most infectiously danceable (and now collectible) music. Their 2014 debut Apiafo was excellent – this one is even better. They do a superb take on the modern highlife sound of Ebo Taylor and Pat Thomas on track 4, their version of Afro-disco (6) will put a smile on your face, and there are even Ethiopian touches here and there. But the heart of the matter here is Islamic funk: the first three tracks are a master class in the genre, and 7 and 9 are just as good. This record is a party in a box, all killer and no filler, easily one of the best things I’ve heard in 2016.
TOP TRACKS:    1    2    3    4    6    7    9
ALSO RECOMMENDED:    5    8    10    11
Labels: Reviews