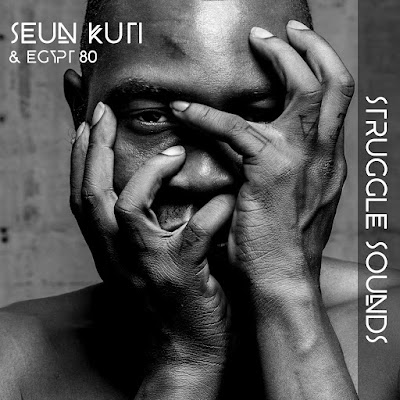 ARTIST: Seun Kuti & Egypt 80
TITLE: Struggle Sounds
LABEL: Sony Masterworks
Seun Kuti has been fronting his dad’s old band since Fela’s death in 1997; the band’s personnel stayed remarkably constant through the transition. His 2011 album From Africa With Fury: Rise was my favorite album that year, but the hard sonic and lyric edge of 2014’s A Long Way To The Beginning left me cold. A Long Way’s co-producer, jazz star Robert Glasper, is back but the approach on this three-song EP (plus a radio edit of one of the tracks) has been tweaked. The aggressively political lyrics with vocals up front in the mix haven’t changed; the tempos are a little slower (115-120 bpm on tracks 1, 2 and 4), the songs are longer (7-10 minutes each, even the radio edit is 6 minutes) and the sound is a lot warmer, more like the old Africa 70 and Egypt 80 sonics. That last item is a big difference for me, because even at its advanced age Egypt 80 is one of the finest Afrobeat machines on the road and they should be heard the right way – this time, they are. Track 3 is a particular pleasure: at 82 bpm it’s the kind of languorous jam that was a staple of Fela’s repertoire. This EP is a welcome return to form and recommended without hesitation.
TOP TRACKS:    1    2    3
ALSO RECOMMENDED:    4
Labels: Reviews