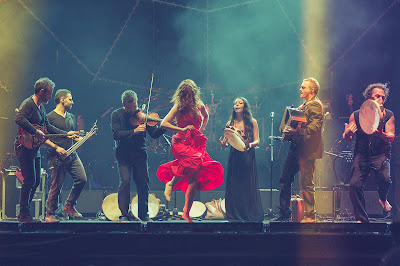 My favorite weekend of the year is coming up soon – that would be the weekend of the Richmond Folk Festival, this year held on October 7-9.  It’s like Christmas for a music junkie: 107 performances by 37 artists from around the world on seven stages, all free (but don’t forget to “make a drop in the bucket” when you’re there), all in my hometown, and I get to share it with 200,000 likeminded fans.

If those big numbers make the event seem a little daunting, I’m here to help you.  Every year I make myself a little Folk Festival guide: an itinerary that keeps me from getting overwhelmed by the choices and the crowds.  I plan out my whole Festival day for Saturday – if there are other acts I want to hear, or if weather or other complications ensue, I can always fill in the gaps on Friday night or Sunday.

Here’s what my Saturday itinerary looks like this year:

12 noon-12:45   Paddy Keenan & Jimmy Noonan at the Community Foundation Stage.  Here’s pro tip #1: Get there early.  No crowds, plenty of parking, and the best opportunity of the festival to sit down right in front of an artist you really want to see.  For me, that would be Paddy Keenan, founding member of Irish supergroup The Bothy Band, probably the best uilleann pipe player in the world.  Listening to him solo on pipes is like hearing John Coltrane on tenor.

1:00-1:45   Canzoniere Grecanico Salentino (CGS for short, pictured above) at the Community Foundation Stage.  And pro tip #2: Stay where you are if you can, so the first two sets of the day are on the same stage (ditto for the last two).  My ancestors are all from the Mezzogiorno (southern Italy to you) and I’m supposed to be the world music expert, but I don’t know all that much about the folk music of my folks.  Fortunately for me, Italy’s foremost pizzica band will be at the Folk Festival this year.  Pizzica is trance music, sort of like Italy’s version of Moroccan gnawa or the whirling dervishes of Sufism.

2:00-2:45   Dori Freeman at the Virginia Folklife Stage.  Dori is a 24 year old singer-songwriter from Galax who grew up hearing old time music, classic country and the blues.  I’m no expert on commercial success, but she sounds to me like she’s just about to become a big-time Americana star.  I heard her in February playing live on WRIR’s program “Over The Edge” (Tuesday 9-11 PM), and I’ve been waiting for a chance to see her – here’s my chance.

3:15-4:00   Kaynak Pipers Band at the Community Foundation Stage.  Pro tip #3: Always figure out which band has the biggest, hairiest bagpipes, and go see them.  Last year it was Ensemble Shanbehzadeh from Iran, probably my favorite set of the festival.  This year it’s the Kaynak Pipers Band from Bulgaria, featuring three guys playing the goat-skinned kaba gaida (“deep bagpipe”) which looks like a giant white sausage casing.

4:15-5:00   The Fairfield Four at the Altria Stage.  Jubilee gospel is one of America’s great contributions to global musical culture.  This singing style is rooted in the twin pillars of the African-American community, historically black universities and the Protestant church, but it also looks outward to popular culture, especially jazz and blues.  Whenever you hear a soul or R&B singer, you’re hearing the influence of jubilee – here’s a chance to hear one of the groups that originated the sound.

5:00-7:30   Unscheduled.  Pro tip #4: Schedule, but don’t overschedule.  Go see something on the spur of the moment, or on a friend’s recommendation.  And a person’s got to eat some time, for goodness sakes.

7:30-8:30   L’Orchestre Afrisa International at the Dance Pavilion.  Pro tip #5: Catch as many sets at the Dance Pavilion (east end of Brown’s Island) as you can.  It’s the festival’s best venue because (a) you can dance if you wanna, and (b) you can get up close and personal with the artists.  You know that sitting down with your hands in your lap while listening to a hot band is a sin, right?

If there’s one can’t-miss act this year, it has to be Afrisa International.  Led for 50 years by the late Tabu Ley Rochereau, this is one of the central bands in the development of the Congolese style called soukous that’s the most popular music Africa has ever produced – it’s still beloved across the continent and throughout the diaspora (and you can hear soukous every other week on WRIR’s “Ambiance Congo,” Sunday 3-5 PM).  If you don’t dance to these guys, better check your pulse.

9:00-10:00   Maceo Parker at the Dance Pavilion.  Pro tip #6: The most fun of the day will be had at the last set at the Dance Pavilion.  It’s the best audience of the festival (also the most integrated audience, but I repeat myself) and always an act that everyone can get.  This time it’s the man who bridges the two banks of the River Funk, James Brown and George Clinton: saxophonist Maceo Parker.  Stay on the dance floor for this one.

I’ll see you at the Folk Festival on Saturday October 8, but don’t talk to me for too long – I’ll be on a schedule, gotta get to the next stage!  Maybe you’ll be on your own schedule.
Labels: Shameless Hype