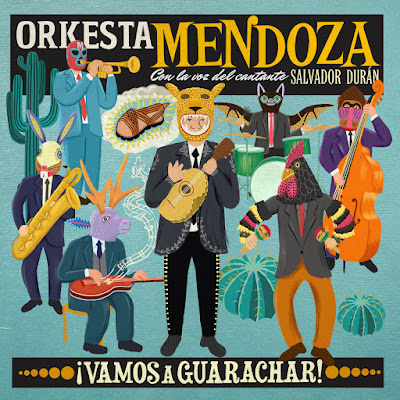 ARTIST: Orkesta Mendoza
TITLE: Vamos A Guarachar!
LABEL: Glitterbeat
Tucson, Arizona is home to a few of the most interesting, hardest to categorize musical projects in the USA: Calexico, Giant Sand, XIXA. Add Orkesta Mendoza to that list. It’s a little big band led by Sergio Mendoza of Calexico; if you can imagine a cross between Colombia’s brassy porro cumbia orchestras, Calexico’s themes for an imaginary Western and Esquivel’s space-age bachelor pad music, that’s the sound he’s going for. It should be an ungodly mess; actually it’s a stroke of genius when it works, which is most of the time here. The album gets off to a roaring start with track 1, a swanky midtempo cumbia, and 2 which sounds like Calexico on speed. 4 is my favorite of the the loungey numbers: if you’ve heard Mexico City’s twangy Matorralman, this track is very similar. 7 is a blast of rootsy rock ‘n’ roll energy right in the middle of the set; sweetened with mariachi strings and a Sam The Sham organ part, this is one of the best rock songs I’ve heard all year in any language. 11 could be off a Calexico album, and 12 is a sampler of the whole Mendoza sound in one song. There are more good ideas here in 43 minutes than many bands have in a career.
TOP TRACKS:    1    2    4    7    11    12
ALSO RECOMMENDED:    5    6    9    10
Labels: Reviews