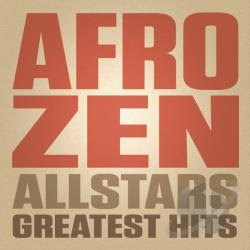 ARTIST: Afro-Zen Allstars
TITLE: Greatest Hits
LABEL: self-released
Joking title aside, this is the debut studio album from Afro-Zen Allstars, a Richmond-based little big band playing the arrangements and compositions of bandleader George Lowe and featuring some of the finest musicians on the Richmond scene today, members of Bio Ritmo, No BS! Brass and many more. Lowe has been obsessed with the music of Ethiopia’s golden age since he heard his first Ethiopiques compilation album. Six of the ten tracks here are Ethio-jazz classics or originals in a related vein, and the remainder span the globe from Latin (2) and Afro-funk (5) to Zimbabwean (7) and even a cover of like-minded locals Hotel X (9). The record is programmed like a live set, with an early relaxed pace allowing players and audience to get into their grooves. The energy level rises on 5 followed by a brilliant, dare I say definitive, arrangement of Mulatu Astatke (6). A lively Thomas Mapfumo version (7) is followed by another superb Ethio-jazz excursion (8) and then the gorgeous Hotel X number (9). There’s no Richmond band more deserving of national and international attention in 2017 than this one – music for your head, feet and soul at the same time.
TOP TRACKS:    1    2    5    6    7    8    9
ALSO RECOMMENDED:    3    4    10
Labels: Reviews