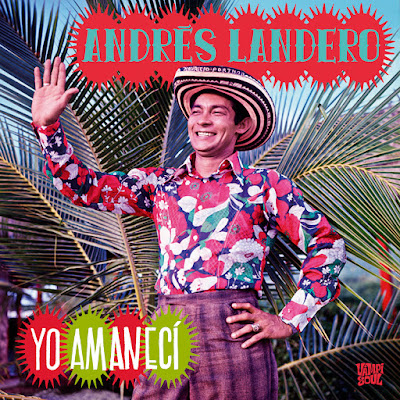 ARTIST: Andres Landero
TITLE: Yo Amaneci
LABEL: Vampisoul
Accordionist, singer and songwriter Andres Landero is the soul of cumbia, one of Colombia’s greatest musical gifts to the world. Landero was never a national superstar (prejudice against Afro-Colombians, costenos and campesinos made it inconceivable); as a result he spent a lot of time touring Latin America, the Caribbean and Europe and he’s one of the main reasons cumbia is so popular in places like Mexico, Argentina and the Dominican Republic. On this set you hear some of Landero’s best recordings from his two stints under contract with Discos Fuentes, 1966-72 and 1979-82. Today we’re so used to the various forms in which cumbia is presented (big bands, electro-cumbia and so forth) that Landero’s versions seem radical in their simplicity: his voice and accordion and a three-piece percussion section, with electric bass the only nod to modernity and urbanity. Most of the tempos are slow to moderate (try 18 if you want a faster one); his solos sound almost avant-garde with their irregular rhythms and minor-key modality. There are some famous songs here (16, 6 and 3 for example), but the whole package is terrific – really, just choose any track and go from there.
TOP TRACKS:    2    3    6    9    13    16    17    18
ALSO RECOMMENDED:    all of the rest of them
Labels: Reviews