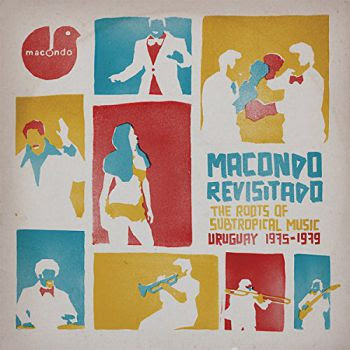 ARTIST: various artists
TITLE: Macondo Revisitado: The Roots Of Subtropical Music, Uruguay 1975-1979
LABEL: Vampisoul
Did you know there was a craze for Puerto Rican plena in Uruguay in the late 70s? I certainly didn’t until I heard this fascinating compilation album. Macondo Discos (named after Garcia Marquez’ fictional town) was a mini-Discos Fuentes, a tropical music factory releasing over 200 sides in ten years, with many of the musicians playing in multiple bands. They weren’t inspired solely by plena: they were digging the full range of Latin dance music from Cuba and Colombia to Rio and Nueva York – you can hear everything from mambo (track 6) to cumbia (2) to an amazing salsa-Brazilian fusion (20). As with Discos Fuentes’ Afrosound band and Peruvian chicha, the Uruguayans were also influenced by the psychedelic movement: check out the electronic keyboards on 1 and 12, which sound like the kind of thing Bio Ritmo is doing right now. And for fans of novelty numbers, peep 5 which starts out like some sort of 1950s mambo-kings thing but halfway through introduces a pair of fast-talking DJs right out of border radio. Interesting and entertaining from beginning to end.
TOP TRACKS:    1    2    5    6    12    20
ALSO RECOMMENDED:    most all of the rest of them
Labels: Reviews