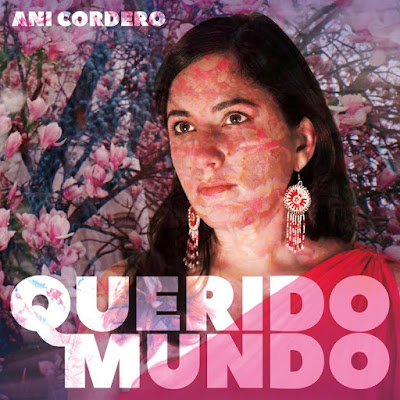 ARTIST: Ani Cordero
TITLE: Querido Mundo
LABEL: self-released
Ani Cordero is a Brooklyn-based singer-songwriter who’s been a member of the bands Pistolera and Bee And Flower, has fronted her own combo called Cordero, and is now releasing her second solo album, one that I think should get her a lot of favorable attention. Cordero, of Puerto Rican descent, occupies a nebulous area in between indie-folk and world music – track 2 could easily slot in between Andrew Bird and Iron & Wine, while you could play 5 alongside Cuban son or even salsa dura. All lyrics are in Spanish and they’re mostly expressly political (the album title is “Dear World,” as in a letter’s salutation), on themes such as government corruption, feminism, immigration and police brutality. Cordero has a fabulous ear for melody – you’ll be humming along in no time – and the arrangements and interplay of her small combo are first-rate. Her voice is right up front in the mix, declaiming her lyrics. The whole package reminds me of the powerful, political and uncategorizable Spanish singer Amparo Sanchez, who has worked extensively with Calexico (another good comp for this project). A winner and best-of-career so far.
TOP TRACKS:    1    2    3    5    8
ALSO RECOMMENDED:    4    6    7    9    10    11
Labels: Reviews