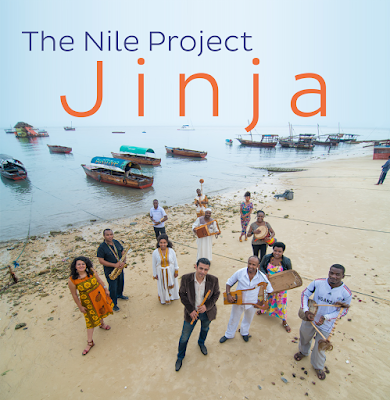 ARTIST: The Nile Project
TITLE: Jinja
LABEL: self-released
The Nile Project is much more than a band – it uses music to build dialogue, empathy and engagement between the citizens of Africa’s Nile River region so they can address the root causes of their conflicts. Founded by Egyptian ethnomusicologist Mina Girgis and Ethiopian-American musician Meklit Hadero, the project’s musical element is a 35-member collective of musicians from the eleven countries in the Nile River basin who collaborate on original music based on the interactions between their various local traditions. A 12-person edition of The Nile Project is touring the USA for the second time this year (they’ll be at the University of Richmond on March 24); this is the project’s second album and it’s a beauty. Track 1 summarizes the Nile Project in 7:56: it’s a multicultural jam session incorporating styles from the Nile’s full length, from Rwanda to Egypt. 3 is a pan-Ethiopian workout, starting with a stately melody and accelerating into a wild Gurage finish. 5 and 9 are built on the singing and ikembe (thumb piano) playing of Steven Sogo of Burundi. Great project, great music.
TOP TRACKS:    1    3    5    9
ALSO RECOMMENDED:    2    4    6    7    8    10
Labels: Reviews