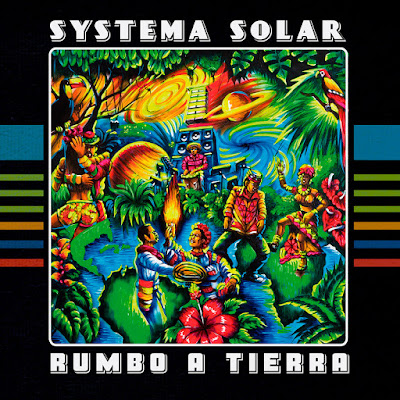 ARTIST: Systema Solar
TITLE: Rumbo A Tierra
LABEL: Nacional
2016 saw the first proper USA release from Systema Solar, a selection of tracks off their first two Colombian-released albums. Now 2017 kicks off with their superb third record – that’s the way to ring in the new year! If you haven’t followed them so far, Systema Solar is a seven-member multimedia collective performing a 21st century version of Afro-Colombian roots music: cumbia, champeta, bullerengue and fandango fused with hip hop and electronica. They’re inspired by Colombia’s pico mobile sound systems and verbena street parties; if ever a band was a mobile street party it’s this one. The album starts with their 2015 single (track 1) about the Venezuela-Colombia migrant crisis and rolls into 2, their ultra-infectious new single. The meat of the album is its second half: 6 revives the boom-bap plus cane-flute formula of “Yo Voy Ganao,” 7 is some of the deepest electro-cumbia ever waxed, 8 pairs dancehall vocals with a festive arrangement, and 10 melds 80s rap, 70s funk and the slinky soukous guitar sound of Bomba Estereo. Best of all is 9, a slowed-down champeta (with more of those guitars) somehow based on American blues. A brilliant album.
TOP TRACKS:    1    2    6    7    8    9    10
ALSO RECOMMENDED:    3    4    5    11
Labels: Reviews