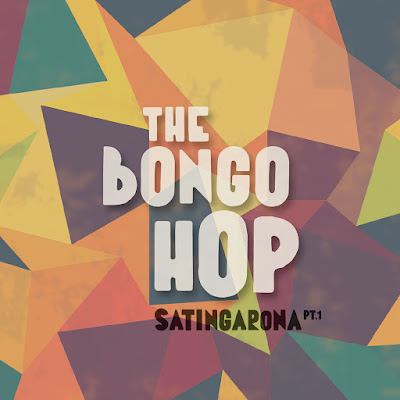 ARTIST: The Bongo Hop
TITLE: Satingarona Pt. 1
LABEL: Underdog
Etienne Sevet is a man of many talents – an urban planner by day in Lyon France, he’s also been a journalist and a teacher; in the music world he’s a DJ, cratedigger, compiler (responsible for Vampisoul’s fabulous Aberlardo Carbono set a couple of years ago), trumpeter and now producer and bandleader with this debut recording. The Bongo Hop’s sound is Afro-Latin-Caribbean with an emphasis on dance floor compatibility. Sevet draws liberally on the eight years he spent living in Colombia, where he befriended producer Will “Quantic” Holland – guest vocalists include Nidia Gongora (the voice of Quantic’s Ondatropica and Flowering Inferno) and Maikcel of the Cali hip-hoppers Zamala Crew, and the songs are sprinkled with deep Colombian genres like champeta (especially on track 1) and currulao. Maikcel takes on Afrobeat on 2 and Congolese ndombolo on 8, to excellent effect. 7, a tribute to Colombia’s Satinga and France’s Garonne rivers, features Gongora singing over what sounds like Benin’s Orchestre Poly-Rythmo playing the music of Colombia’s Pacific coast. And 4 is a completely original West African-Caribbean-Latin blend. This one, folks, is a winner.
TOP TRACKS:    1    2    4    7    8
ALSO RECOMMENDED:    3    5    6
Labels: Reviews